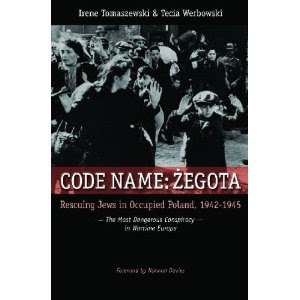 Irene Tomaszewski and Tecia Werbowski have recently published the American edition of their book about Polish attempts to save Jews during the Holocaust.

Code Name: Zegota: Rescuing Jews in Occupied Poland, 1942-1945: The Most Dangerous Conspiracy in Wartime Europe tells the story of the only secret organization in occupied Europe set up for the sole purpose of saving Jews. The first book on the subject in English, it details the danger and complexity behind Zegota rescue attempts, clarifying the relationship of the Germans, who had total control; the Poles, who were relegated to sub-human status and treated as slave labor; and the Jews, designated nonhuman and collectively condemned to death. Illuminating the moral dilemmas that arose as one life was pitted against another under the lawless apartheid conditions created by the Nazis, Code Name: Zegota explores the critical situation in occupied Poland and the personalities that responded to desperate conditions with a mix of courage and creativity. It profiles the key players and the network behind them and describes the sophisticated organization and its mode of operation. The cast of characters ranges from members of prewar Poland's cultural and political elite to Girl Guides and Boy Scouts, who worked as couriers. As this inspiring book shows, all of these brave souls risked torture, concentration camps, and death—and many paid the price.

The book is available from Greenwood Press and Amazon.

Irene Tomaszewski is one of the editors of Cosmopolitan Review.
Posted by John Guzlowski at 10:33 AM 1 comment: