I received a note yesterday telling me that Helen Eisen recently died, on Oct. 29, 2012 in New York.

I never met Helen, but I did read her book of poems, The Permeability of Memory, and it touched me deeply.  Like me, Helen had been born in a Displaced Persons camp, a refugee camp, after World War II to parents who were Polish survivors.

In 2009, I did a blog about Helen and her writing.  I would like to repost it now as a memorial to Helen.


THE PERMEABILITY OF MEMORY

Helen Eisen's The Permeability of Memory drew me in because she did something that I find myself unable to do. 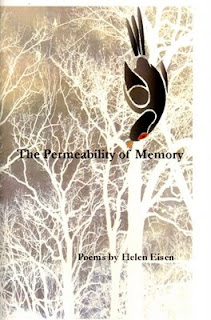 I've written a lot about my father and mother and their experiences in the concentration camps, but I've seldom been able to write about my own memories of my experiences in the refugee camps, the DP camps, after the war. Part of this, I'm sure is my inability to remember much about those times. I was born in 1948 and left the camps in 1951 to come to America with my parents. Another part of this, however, I think, is my sense that my story -- as opposed to the story of my parents and the people of their generation -- is nothing. I find it almost impossible to think of my parents' experiences within the context of my experiences. I can't think about that connection. When I write, I write about them.

Helen Eisen, however, has somehow found a way of connecting herself to her past and her parents in ways I can't, and I admire her writing and her gift for doing this.

I asked her a couple questions about memory and about the title of her work The Permeability of Memory.

Here's what I wrote to her:

The Permeability of Memory? Can you please explain the title? Memory is something that really interests me. I write a lot about my parents and I know that my memories of their past don't always line up with their memories of their past or my sister's memories of the past. In fact, I wrote a poem about the distance between my mom's memories and mine. It's called "My Mother Reads My Poem 'Cattle Train to Magdeburg.'" In addition, my mother didn't want to share her memories for a long time, while my dad was always interested in doing so.

I also find memory fascinating, what it is, how it works, how it's transmitted. I meant the title to talk to that-- how memories are passed on, the movement of memory over time and distance. I think it is lovely that you use the word "distance" when you say in your email, "I wrote a poem about the distance between my mother's memories and mine." At different times I've been asked, "When did you first learn about the Holocaust?" (By the way, we never used the term. We just called it the war. It's like if a relative were standing in your kitchen dressed in an old bathrobe and you say, "Mr. Buckleboren, what would you like for breakfast today? I do hope we can appropriately accommodate you.") The thing is I don't remember when I learned about the war, it's like I always knew about it, which of course at some level I did. Its effects, if not the actual verbalized memories, were transmitted by my parents and the other survivors that used to visit our apartment, but seemed to live with us. Their visits were never just visits. And with them came all the memories, like butter spread on rye and radishes in the cottage cheese. Everyone disagreed about the wheres and whens, and there was a lot of (to me bizarre) laughter. I'd stay very quiet and listen, trying to make sense of it all. I have memories of hiding under the kitchen table, but I don't believe I really did because it was a small table. But I think I imagined this memory because I knew if they became aware of me in the room they'd shoo me out, so how would I have stayed in the room if I wasn't hiding?

To return to my explanation: I learned about the war through the memories of my parents, which they relayed verbally and non-verbally. (Father much more verbal and very, very confusing). Memories live (and die) in the body. I think the non-verbal transmission was more potent, more constant/consistent, more direct, more exact--even if I can't translate this exactness. All mothers sigh, no mother sighs like my mother. She is holding me as a baby, and when she let them other women in the DP camp held me. What passed through them to the children, in my case, to me? I'm sure the particular tensing of their muscles, their breath, their scent, all their vital, non-verbal, sub-vocal, innate and learned vocabularies left some kind of imprint.

Mostly knowledge of the war--my memories of the war--came through the body of my mother. I think memories live in the body, and die, change, devolve, grow, dependent like anything else on relative conditions and context. Who is listening? What's the temperature when I'm talking? How well do I remember this recipe when I'm starving? When I'm full?

From the body of my mother to my body. I see it as a kind of osmosis--the permeability of the membranes between us, and the membranes between memories within her. What she's closed off, what she's let through. How far through? What's the resistance to letting me see them, letting me in, how much of it because she wants to keep me out, how much because she wants me to see because she is alone there, but doesn't want to want me to be there.

Osmotic passage occurs from the more dense to the less dense. From my mother's milk, I drew my breath, and she filled me.


Here's one of the poems from Helen Eisen's Permeability of Memory:

MY MOTHER MY MOTHER

Helen Eisen's The Permeability of Memory is published by Cherry Pie Press. You can read more about the book by clicking here.
Posted by John Guzlowski at 9:33 AM 2 comments: