Jehanne Dubrow’s The Hardship Post (winner of the Three Candles Press 1st Book Award) is not afraid to ask hard, necessary questions about identity and memory, grief, and art as they relate to the Holocaust. 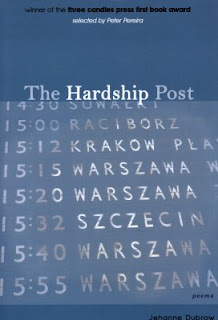 Dubrow’s answers are shaped into verse that is constantly moving with thought and feeling at the intersection of her own and her family’s past. She speaks of her birth, her travels to Africa and Eastern Europe, her life as a diplomat’s daughter, but always with the sense that her life is a life in exile, separated from the unspeakable that touched her family and millions of others despite her best efforts to understand what happened.

She speaks of, writes about, these lives with a care, imagination, and thoughtfulness that finally convince us of the depth of her closeness to and love for these lives.

We see this in so many of the poems but perhaps most fully in the following poem:


Zeno's Paradox of the Shtetl

halfway
to Poland in a sleigh,

imagining the silver runners sled across
the permafrost,

and halfway to Galicia again,
passing the wooden synagogues, the men

who wear black coats and fur-trimmed hats,
their wives and daughters fat

the women’s faces lined, opaque,
a pewter sheet of ice above a lake,

and halfway to a town that shivers by
the Vistula, the river’s luminosity

like fish scales scraped
away with knives, then halfway following the liquid shape

which water makes through land,
always the distances expanding,

a home so faraway it can’t be seized,
intangible as winter through the trees.

Jehanne Dubrow was born in Italy and grew up in Poland, Yugoslavia, Zaire, Belgium, Austria, and the United States. Her work has appeared in Blood to Remember: American Poets on the Holocaust (ed. Charles Adés Fishman), Poetry, The Hudson Review, New England Review, Barrow Street, Gulf Coast, Poetry Northwest, and others. She was the Editor's Choice at KRITYA, and a number of her poems are featured there.

She is also the author of a chapbook, The Promised Bride (Finishing Line Press 2007). A second poetry collection, From the Fever-World, won the Washington Writers' Publishing House Prize and will be published in 2009. A third collection, Stateside, will be released by Northwestern University Press in 2010.

She blogs at Notes from the Gefilte Review. Her website is at www.jehannedubrow.com.

The Hardship Post is available at three candles press and at Amazon.
Posted by John Guzlowski at 9:30 AM