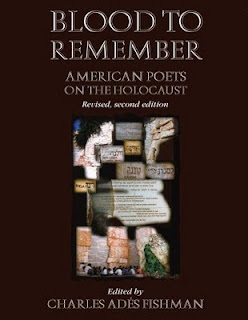 Each has its own special focus. One concentrates on poets alive during the Holocaust; another gathers together poems from around the world; and a third looks at poems written by Holocaust survivors and victims. All of these works, of course, are valuable, but I find myself most often returning to one anthology of Holocaust poetry, the one edited by Charles Adès Fishman, my co-editor here at Writing the Holocaust. The range of poets represented is truly extensive, and whenever I find myself wanting to see what a poet has written about the Holocaust, Fishman's Blood to Remember: American Poets on the Holocaust is the book I turn to first.

It contains the work of over 200 poets, some old, some new, some well known and others not so well known, but the breadth and depth of writing here is remarkable. Also valuable are the personal remarks made by many of the poets regarding what moved them to write poetry in response to the Holocaust.

An extensive review of this book by Michael R. Burch appears at Hypertexts.

Occasionally, we run across a piece of writing about the Holocaust that we want to share with people. "Hope" is one of those pieces. It was written by Barry Koplen, a poet and blogger. He writes often about chance meetings he's had with people as he travels or works in his clothing store in Danville, Virginia. This essay is about one of those encounters. 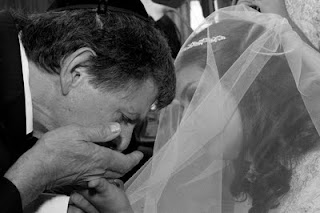 Assertively, the butcher with a patch over his right eye responded to a comment I had made to my daughter about the sign that advertised kosher salami made from turkey.

"H'it comes from Israel," he announced with a stoic's pride. His 'it' sounded a little like 'hit', his vestigial ch suggesting an accent from the Mideast. "You want a taste?"

"Yes, please," I said, cheerfully, to the man who resembled Moishe Dayan. Moments later, on a piece of wax paper, he slid two thin slices toward me. "That's too much," I said, tearing off a small section of one slice.

"How you gonna know what it tastes like?" Impatient with me, he seemed to be telling me that I knew nothing about some of the world's finest salami. What I did know was that I can't tolerate ordinary beef salami because it's too garlicky.

This was different, milder. "I'll take a quarter pound," I said with a smile.

Moments later, he nodded as he handed me the wrapped packet. I didn't tell my daughter what I thought I had seen in the man's eye, a suppressed pain that she probably hadn't noticed. She was too excited; we had just toured Towson University, and she loved the school. It seemed she had decided to do her graduate work there in Jewish studies.

"Look at this!" I exclaimed seconds later when I spotted delicacies I had often known as a child. We marveled at a row of five varieties of fresh knishes, then turned from the meat counter to examine ten different kinds of kugel. "Even in Israel, I didn't see a store like this," the 7Mile Market, a kosher supermarket on the outskirts of Baltimore.

On inviting shelves, we saw breads and pastries, including boxes of what appeared to be the kosher version of Little Debbie Cakes by Entenmann's in New York. "I like to give these as gifts," my daughter said, as she examined the different flavors.

Leaving her there, I returned to the meats, and, since I was the only customer approaching that counter, was spotted by the butcher I had spoken to earlier. "Yes?' he asked, his expressive voice a match for his sullen demeanor.

"Are you from Israel?" I felt sure I had I identified his accent.

"I went there a few years ago," I told him, "to meet the man who wrote Light One Candle. He is a Holocaust survivor, Solly Ganor."

"I know the book," he said, eying me with more interest.

"Solly came from Lithuania. I met him when I went to Israel for his annual Holocaust survivors' reunion at Ramat Gan. Have you been there?"

His left eye widened as he beckoned to me. "My mother and her sister were in the Holocaust. They survived..." He paused.

"Then you've been to the reunions?"

"Yes, but before you were there. My mother died two years ago."

I could hear my daughter calling for me. But there was so much more I wanted to hear, stories I wanted him to share, reminiscences I would have listened to for hours and hours. Perhaps I would have had a chance to tell him about a woman I had met, an American who's Dad had fought in World War II. He'd been in Germany, had seen a concentration camp liberated, had taken pictures of the prisoners. A month ago, her Dad died. While sorting through his memorabilia, she found an album of those pictures, actually two.

His collection was one she had never seen. Nor had she seen the other one she found, a scrapbook with German inscriptions; its images of a Nazi soldier, standing tall amidst downtrodden Jews. Her father had probably pilfered it, she told me, a trophy from the war.

She was concerned about giving it back to the soldier's family. I wasn't at all sure that anyone would want to claim those confirming images. Many Germans I had known didn't want to think their relatives had anything to do with Nazi atrocities.

The butcher was speaking to me as my mind wandered to thoughts about that woman and her compelling albums. "Do you want to know how they escaped?" His focus riveted mine.

I didn't breathe, barely shook my head as if to acknowledge and, at the same time, ward off the horrible details I knew I was about to hear.

"In the lines, when the ones to the right went to the gas chambers, Eichmann told her and her sister to go to the left. Then he took them out of the line to be his secretaries."

"Adolph Eichmann?" I wanted to ask. But I didn't have to.

"Eichmann," he said, as if that fact still seemed irreconcilable.

I held his eye as if he had just shared a story that was still too difficult for him to bear alone. "Will you come back again?" he asked, as he reached out to shake my hand.

"Yes!" I wanted to exclaim, "to see my daughter and you. And to hear more about your remarkable family." But I didn't say a word. I had to process what he'd told me, had to consider the profound bit of history he had shared.
So I said very quietly. "Yes, I will see you when I return again."

He smiled at me, a smile so knowing it filled me with wonder. "Shalom," he said, with a caring glance.

"Shalom," I responded, as one who had been humbled by a story that seemed a most uncommon blessing.

To read more of Barry Koplen's writing, stop by his blog, Poetscry.

The photo above shows Barry at the recent wedding of his daughter Chana Batya Anderson.
Posted by John Guzlowski at 10:10 AM No comments:

Writing the Holocaust has primarily focused on scholarly work on the literature of the Holocaust, but occasionally we find a creative work that we like to share with others.

"Elegy for the Shtetlen" is such a poem. It is a lament for the predominantly Jewish small towns of Poland that were lost because of the Holocaust. Originally written in Polish (Elegia miasteczek żydowskich) by Antoni Slonimski (1895 – 1976), the translation here is by Scottish writer Jennifer Robertson and her husband Stuart. 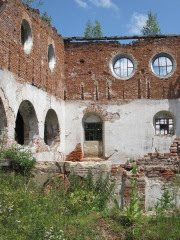 No more, no more shtetlen in Poland,
whether in Hrubieszów, Karczew, Brody or Falenica
ou’d be hard put to find lit candles in their windows,
or catch the strains of song in wooden synagogues.

The last vestiges of Jewish life have gone;
blood covered over with sand, all traces swept away,
walls whitened with fresh coats of lime
as if some plague has passed, or a feast is welcomed in.

Here the moon shines solitary, alien, chill, and pale.
Out of town, on the highway, where night is ablaze,
my Jewish kinsfolk, makars a, will not find
Chagall’s two golden moons.

Those moons illumine another planet now.
They fled, frightened by the sombre silence.
The shtetlen are no more where the cobbler was a poet,
the watchmaker a philosopher, barber a troubadour.

The shtetlen are no more where Bible chants
swirled on the wind with Polish song and Slav lament,
where Jewish grandfathers, secluded in shady cherry orchards,
mourned the holy walls of Jerusalem.

Those shtetlen are no more, vanished with a shadow,
and this shadow will intrude between our words
until the advent of brotherhood, unity renewed:
two nations nourished by centuries of suffering.


We were curious about the words "makars a" in the third line in the third stanza, and Ms. Robertson said, "The line you are asking about is my rendering of krewni moi zydowscy, poetyczni chłopscy, which literally means my Jewish relatives, poetic lads (or boys). My husband Stuart suggested putting the slightly pawkish humour of the phrase into the Scots makars a - makar is the Scots for poet (maker) and a, all is sometimes written with an apostrophe, a', though purists of the Scots tongue prefer to omit these apostrophes as they suggest something is missing ie the English form and thus dilutes the Scots!"

Ms. Robertson is the author of a number of works on the Holocaust, including a collection of poems about the Warsaw Ghetto entitled Ghetto (Lion Publishing, 1989)and Don’t go to Uncle’s Wedding: Voices from the Warsaw Ghetto (Azure /SPCK).

She feels that it's important to continue to write about the Holocaust despite the pressure sometimes not to.

You can read more about her writing at her website.


Posted by John Guzlowski at 1:10 PM No comments: