Polish-American novelist Leslie Pietrzyk has recently started a website called Redux to showcase classic pieces of creative writing that have so far not been published online.

I first read this essay about 3 years ago, and I thought then that I had never read anything better about what it feels like to visit Auschwitz. I had visited there in 1990 and written about the visit a number of times, about what it was like being a tourist there, but nothing I've written and nothing I've read by other writers compares to what Mark Lewandowski offers in this superb essay. Here is an excerpt. The entire essay along with a brief piece by Mark about how he came to write the essay is available at the website. 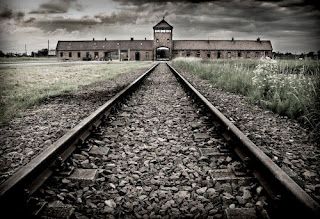 On the morning of the October day that England qualified for Italia ’90 (the World Cup soccer tournament), a small group of Englishmen were seen by some of the sports press at Auschwitz, laughing and posing as they took pictures of each other—doing the Nazi salute. Pete Davies, “All Played Out”

At Birkenau stands a mound unlike those dotting the countryside that Poles have built in remembrance of past generals and statesmen. You will not see picknickers lay out blankets on it or watch their children roll down the slopes. The Birkenau mound is a mass grave for Soviet soldiers killed by the Nazis. The bodies were packed so tightly together that they are still decomposing, and when it rains now, almost fifty years later, human grease rises to the surface and fans out through the grass in a brilliant rainbow of color.

Not far from the mound lies what looks like an ordinary pond. Bend over and peer into its depths and you might be surprised not to see a minnow or two, at least, in the water. Take a stick. Dip it into the water and movie it in circles. Soon, a whirlpool of gray ash will funnel to the surface. This pond is only one repository for the remains of the Jews.

A Polish actor told me that these were just a couple of the sights in the Auschwitz complex most tourists miss. I was with two American women I had met in a youth hostel in Kraków. This was the summer of 1990. The Berlin Wall had been down for only seven months. American tourists were still a novelty to most Poles. The actor, who spoke English fluently, spied us three on the rickety commuter train from Kraców to Oświęcim, site of Auschwitz and Birkenau. He was going to visit his mother, who was a librarian at the Auschwitz museum.

“By all means,” the actor said, “do not spend the entire afternoon in Auschwitz. After you have watched the movie and seen the major displays, go to Birkenau. The barracks still stand unmolested by museum directors. Wander the buildings and you will read messages written in coal by the inmates. You will find fragments of clothing, steel cans, rotted straw, heating stoves. Leave the barracks and follow the tracks to the gas chambers. They have not been reconstructed. They have been left the way they were found, a much more profound statement to the horrors of the Holocaust than the glitz you will find in Auschwitz. Why would the retreating soldiers bother to destroy the evidence if they were not aware of the incredible crimes they had committed against humanity? Do not believe that they felt justified or that Hitler brainwashed them. They knew their sin. You will not experience their guilt among the glassed-in cases of human hair and suitcases at Auschwitz. Only in Birkenau, the much larger of the camps, will you find what you are seeking.”

And what were we seeking? What do the hundreds of thousands who visist concentration camps every year hope to find amongst the barbed wire, the staggering statistics pasted to barracks walls, the bricks riddled with bullet holes and once saturated with blood?
________________________________


To read the entire essay, click here: Redux.
Posted by John Guzlowski at 2:12 PM No comments:

Rosenbaum on Rosenfeld: A Strong Review of an Important New Book 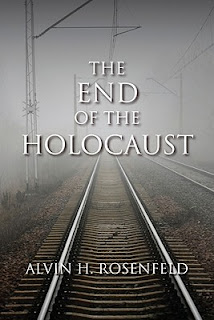 By Ron Rosenbaum
Posted by Charles Adès Fishman at 8:19 PM No comments: