The Holocaust's Uneasy Relationship With Literature 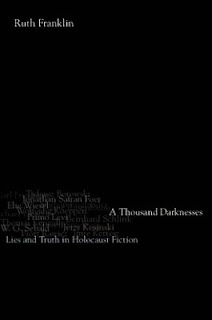 The following article appears in the Dec. 28, 2010 issue of The Atlantic Monthly:

Literature and the Holocaust have a complicated relationship. This isn't to say, of course, that the pairing isn't a fruitful one—the Holocaust has influenced, if not defined, nearly every Jewish writer since, from Saul Bellow to Jonathan Safran Foer, and many non-Jews besides, like W.G. Sebald and Jorge Semprun. Still, literature qua art—innately concerned with representation and appropriation—seemingly stands opposed to the immutability of the Holocaust and our oversized obligations to its memory. Good literature makes artistic demands, flexes and contorts narratives, resists limpid morality, compromises reality's details. Regarding the Holocaust, this seems unconscionable, even blasphemous. The horrors of Auschwitz and Buchenwald need no artistic amplification.

Since the genre emerged, this has been the defining stance of Holocaust literature—that a work's verisimilitude, or its truth-value, far outweighs its literary merit. The memoir, the first-person unembellished account, has long been considered the apotheosis of the form. Or even, according to some, the only acceptable form—confining Holocaust literature to documentation, and reflexively censuring everything else for crassly misrepresenting the unrepresentable.

Elie Wiesel—the personification of Holocaust remembrance—is the fiercest exponent of art's illegitimacy with respect to the Holocaust. "Then, [Auschwitz] defeated culture; later, it defeated art," he wrote. "The truth of Auschwitz remains hidden in its ashes." Theodore Adorno's famous dictum, that to write poetry after Auschwitz is barbaric, has been frequently invoked to criticize any artistic appropriation of the Holocaust.

The apprehension is certainly understandable. The Holocaust is, 60-plus years later, still politicized, and suspect to questionable artistic ambitions and misleading emphases and glosses; the six million deserve unqualified deference, not just our idle respect. Apprehension, however, shouldn't precipitate repudiation; and Holocaust literature's potential shouldn't be understated (or denied), nor its definition misconstrued.

Too many critics, instead of assessing and parsing and criticizing (in the healthiest sense), treat Holocaust works as inviolable, beyond judgment or even approach. Such sacralization is a disservice, smothering the critical dialogue that great literature engenders. Ruth Franklin's new book, A Thousand Darknesses: Lies and Truth in Holocaust Fiction, is therefore more than a towering work of criticism and insight—it's an invaluable corrective. Franklin, the in-house critic at The New Republic, seeks to reclaim Holocaust literature as just that—literature about and inspired by the Holocaust—and to reaffirm its significance.

The memoir's primacy over 'standard' literature is misguided for two overlapping reasons: first, the distinction between the two is deceivingly small; and second, their respective functions are aligned. Franklin devotes each chapter to a major Holocaust work (or body of works), from Night to Schindler's List, repeatedly demonstrating just how slippery and arbitrary the division between fact and fiction really is. Because the memoir as unfiltered actuality is a myth. Fickle and unreliable memories must be reconstructed and made coherent; a story's assembly, style, and characterization will inevitably compromise any strict retelling. Emphatically, this does not mean the work is less autobiographically or historically valid—only that it is never pure autobiography or history, and has to be understood and embraced thus. Truth isn't synonymous with historicity, and infidelity to the latter isn't necessarily betrayal of the former.

Even Wiesel's Night, when compared to his autobiography, All Rivers Run to the Sea, betrays some artistic license: Moshe the Beadle is, in fact, a composite character, and much of Wiesel's ordeal was excised and sharpened for Night's publication. (The original Yiddish manuscript was, Weisel himself reports, more than 800 pages long, about 700 pages longer than the finished product.) The Diary of Anne Frank was edited by Anne herself, then further edited (and censored) by her father, Otto. (Later, playwrights cut and reworked passages for a decidedly more universal and cheery flavor. Diary, in book and stage form, is for many the primary (or only) exposure to the Holocaust, and serves as a cautionary demonstration of art's role in shaping historical perspective.)

The line between novel and memoir, between story and history, is fine indeed. Franklin illustrates how many exemplary (though not necessarily renowned) Holocaust works dance between genres—and are no less valuable for it. In Piotr Rawicz's Blood From the Sky , the narrator (who may or may not be a survivor) patches together a semi-invented character's chaotic manuscript, with dates and names changed or omitted, all amid surrealist elements. W.G. Sebald blends facts and borrows histories and layers narration to produce his masterpieces. Jakob Littners Aufzeichnungen aus einem Erdloch is a book originally believed to be fiction and later discovered to be based on fact (its history is a dizzying stream of authorships, ghost-authorships, translations, and revisions, all superbly traced by Franklin); and despite its shifting context, it retains its value (albeit in various currencies).

Memoirs, even Holocaust memoirs, might be properly understood as, or at least overlapping with, literature. This is no downgrade. Literature is supplementary, not antithetical, to history: it allows, and in the best instances demands readers to universalize, empathize, to visualize and imagine, not merely to be informed. Testimony is critical, of course, as are scholarship and personal histories. The Holocaust is one of the most thoroughly documented events in history, and still entirely resists comprehension. The unadorned facts and uninflected history—pictures, texts, accounts—are almost unbearably distressing. Viewing images of stacked corpses or skimming meticulously organized lists of dead children or hearing of the unlimited fuel for the ovens, what soul doesn't collapse?

Literature, though, affects us in ways that even the most brutal history cannot. It vivifies and propels an event, however geographically and temporally and psychologically removed, towards the personal and immediate. If history teaches and (harshly) informs, then literature rouses and intimately disturbs. Literature is an emotional chronicle, a history of the intangible, a quest to impart sentiment, not information. Conveyance of the Holocaust is an impossible but necessary appeal to our imagination; and literature is the pathos to history's logos. Not merely learning about, but identifying with.

Memoirs are surely part of this legacy. Night's power isn't derived only from its harrowing story, but from its unflinching, deceptively plain delivery of that story, as well. Like other celebrated Holocaust works, it hits a perfect emotional pitch, if you will; notes of tragedy in agonizingly effective arrangement—an arrangement that's measured, appreciated, and felt with literary instruments. Knowing the history isn't enough: literature—and humanism in general—is, as Franklin points out, the spiritual retort to the Nazis' crazed and brutal program of dehumanization. It's more than memory that we must keep alive. Literature reminds us that significance isn't time-dependent, that empathy isn't delimited by proximity, that victims aren't statistics. For the role of Holocaust literature—the eternal role of literature, period—is to make it new again, to make it real, to make it felt.

This article available online at:

Copyright © 2010 by The Atlantic Monthly Group. All Rights Reserved.
Posted by John Guzlowski at 2:31 PM No comments: