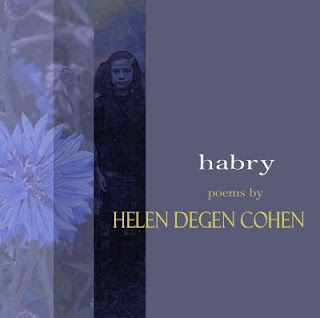 I first read Helen Degen Cohen's poems about her experiences and her parents' experiences during and after the Holocaust in the early 90s. At the time, I was writing about my parents and their experiences in the slave labor camps in Germany, and I found in Helen's poetry a voice that seemed to understand and speak of a world with a depth and complexity and compassion that I wished I could echo.

Helen wrote about her experiences as a child during the war. She was in the Lida Ghetto in Belorus, then in hiding with her parents in the town's little prison (where her father, a barber and jack-of-all-trades, created a flood only he could fix, in order to show the Gestapo how indispensable he was). Later, separated from her parents, she was in hiding again in a cabin surrounded by the farm fields she grew to love and the flowers that grew alongside them. The flowers were like habry, cornflowers. While she was in hiding, her parents were with the partisns in the resistance, as described in the new movie Defiance.

Her story and the way she told it touched me. I still can't relate what happened to her when she became separated from her parents and her mother gave her a tin cup without tears coming into my voice. I searched out her writing in little magazines like Spoon River Poetry Review and The Wire and anthologies like Blood to Remember: American Poets on the Holocaust and Concert at Chopin's House: A Collection of Polish-American Writing.

Her fiction and essays blew me away, but I found myself especially drawn to the voice in her poems. I re-read them and thought about them and wrote a scholarly article about them.

When I heard that Helen was finally gathering these poems together and publishing them along with more recent poems about her experiences, I looked forward to her book more than I can remember looking forward to any other book of poems.

That book Habry was everything I had hoped it to be.


Here is one of my favorite poems from Helen's new collection:


I remember coming into Warsaw, a child


out of a sheer, sunlit countryside,
where sometimes a goat made the only sound in
all the universe, and a car engine would certainly
tear the wing of an angel. Entering burnt Warsaw
and the Sound of the World, how strange, how lonely
the separate notes of Everything, lost in a smell of
spent shots still smoking, a ghost of bombs, a silence
of so many voices, the ruined city singing not only
a post-war song but an Everything hymn of dogs wailing,
a car, a horse, a droning plane, a slow, distant
demolition, hammers like rain, the hum, the hum,
bells and levers and voices leveled and absorbed
into the infinite hum in which the ruins
sat empty and low like well-behaved children,
the ruins, their holes, like eyes, secretly open,
passing on either side, as we entered Warsaw, an air
of lost worlds in a smoky sweet light ghosting
and willing their sounding and resounding remains

I've also posted a blog about her earlier book On a Good Day One Discovers a Poet at the blog Writing the Polish Diaspora.

Helen's memoir about returning to Warsaw to find the Polish woman who helped save her appears at The Scream on Line along with a number of her poems and a short story based on her childhood experiences, "The Edge of the Field."
Posted by John Guzlowski at 2:11 PM